University of Tulsa College of Law alumna Shawna S. Baker (JD & MS ’02) serves as a justice on the Cherokee Nation Supreme Court and is the founder and principal of Family Legacy and Wealth Counsel, a legal firm specializing in estate planning and business consulting. This fall, she will add to her busy schedule by taking up the position of Distinguished Alumna in Residence at TU Law.

Baker’s expertise is remarkably varied, including human rights, health, Native American law and taxation. During her residency at TU Law, she will draw on this wealth of knowledge and experience to lead courses on Federal Indian Law and Evidence. Baker is also looking forward to working with President Brad Carson, Dean Oren Griffin and TU Law’s faculty to revitalize the college’s Native American law programming.

As she gets set to return to the halls of academe, Baker recently engaged in a lively and thoughtful Q&A. Addressing an array of topics — from the surprising Hollywood spark that motivated her to study law to the significance of being an open and proud 2SLGBTQ+ legal professional, to the need to destigmatize HIV/AIDS in Indian Country and advice for people considering a legal career — Baker shone a light on her convictions, her work and the impact brilliant, focused advocates can have on their society.

Where did you grow up and what were some of the early influences that, looking back, led you to study the law?

I grew up in a small, rural town on the Oklahoma and Arkansas border located within the Cherokee Nation Reservation.

The sole impetus for me to study law was the film The Ghosts of Mississippi. Released in December 1996, the story recounts the trial and conviction of Bryon De La Beckwith and the 30 years it took to secure justice for the family of Medgar Evers.

At the time, I was midway through my freshman year at John Brown University as a pre-med major. After watching the film, I became curious about and disheartened by the grave amount of injustice and inequality occurring in present-day America. I felt compelled to alter course.

You serve on the board of trustees of Oklahomans for Equality and you are the first 2SLGBTQ+ person and the third woman to serve on the Cherokee Nation Supreme Court. What are the personal and cultural-political significances of these aspects of your identity as they relate to your role as a justice, lawyer and academic?

In 2020, Cherokee Nation Principal Chief Chuck Hoskin Jr. and Tribal Council focused on my qualifications as the nominee, rather than on who I love or my gender. I am immensely grateful for my tribe’s inclusive embrace.

The gift of full equality grants me the personal freedom to be authentic 24/7/365. In turn, the totality of my energy is channeled to serving the Supreme Court and, hence, our tribal citizens.

I am continually mindful that my presence matters. Through me, 2SLGBTQ+ persons as well as girls and women can picture themselves serving their tribe both on the bench and at the highest level of government service. Most of all, my representation reminds them that they, too, are valued and beloved members of our tribe.

June is Pride Month in Tulsa and much of the rest of the country (and beyond). As a Native American, a 2SLGBTQ+ person and a thoughtful, influential person alive today, what do Pride and Pride Month mean to you?

Pride is a time for 2SLGBTQ+ persons to celebrate the equality and freedoms we presently enjoy while simultaneously remembering and paying tribute to the catalyst of the gay rights movement, the Stonewall Uprising of 1969 and the multitudes of daring individuals upon whose shoulders we stand.

As we celebrate, we are visible to our families, friends, co-workers and broader communities.  Visibility provides an opportunity for us to counter historical stereotypes, to provide a safe space for discussion and education, and to affirm our individual and collective dignity. Until “all [persons] are created equal,” as penned in the Declaration of Independence, is a lived experience by every citizen subject to American jurisprudence, there is essential work to be done.

Health and health law are important subjects to you. In particular, you are involved in the HIV arena. Would you illuminate this facet of your work?

My private practice focuses on estate planning and, as an academic, I began to explore the intersection of law and medicine. Numerous negative health disparities exist at alarming rates for 2SLGBTQ+ persons as well as indigenous peoples. Because Oklahoma is one of seven states with the highest incidences of new HIV infections per capita, I have every motivation as a tribal citizen, an Oklahoman, a woman and a member of the 2SLGBTQ+ community to ensure that all persons, regardless of gender and sexual orientation, learn about HIV prevention and treatment.

We must find a way to destigmatize HIV in Indian Country. Every tribal citizen must be encouraged to know their HIV status, to discuss the efficacy of anti-viral drugs and, ultimately, to actively participate in lowering transmission rates.

Our task when dealing with HIV should be as simple as discussing the importance of COVID-19 testing, vaccinations and mask-wearing. Sadly, it isn’t. To that end, I presently serve as an advisor to Cherokee Nation Health Services on its Ending the HIV Epidemic project. Outside of the Cherokee Nation, I serve on the national-level Indian Health Service and the Northwest Portland Area Indian Health Board’s Native Ending the HIV Epidemic Advisory Committee.

You also serve on Chief Hoskin’s Domestic Violence Task Force. I wonder whether you would tell us what that body is and your role on it.

More than 80% of Indigenous women experience violence, more than half experience sexual and/or intimate partner violence, and we are murdered at 10 times the national average.  In August 2021, Chief Hoskin created the Domestic Violence Task Force (DVTF).

The DVTF is charged with reviewing all existing tribal laws and policies and providing feedback, either in the way of revisions or through the proposal of new and innovative ideas for strengthening the nation’s response to domestic violence and, thus, improving protections for women and children. It is my sincere hope that the policy recommendations and implementation efforts directly correlate to an immediate and dramatic reduction in the number of domestic violence incidents occurring throughout our tribal nation and the number of domestic violence cases brought before our courts.

After you earned a joint JD and MS from The University of Tulsa, you went on to complete two more master’s level legal programs. What were they and what motivated you to gain those additional qualifications? 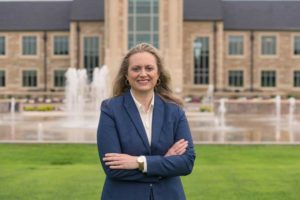 During my final year at TU Law, I shared with some of my professors an interest in pursuing an academic career in the law. True to form, the deans and professors began to mentor me for such an endeavor. This included inviting me to serve on the college’s Appointments Committee as the student representative. In that role, I had the honor and pleasure of traveling to Washington, D.C., to interview candidates for the law school’s tenure-track positions. One of the takeaways from that experience was many, if not most, of the candidates had one or more Ivy League degrees. So, in order to become a competitive candidate on the academic market, I attended Columbia Law School for my first LL.M.

After returning to private practice, I pursued a second LL.M. in taxation from NYU Law School.  Taxes are the point of intersection for accountants, financial advisors and estate planning attorneys. Spending additional time in New York City certainly did not discourage me!

For people contemplating applying to law school or currently in the midst of a JD program, do you have any words of advice?

When I was a student at TU Law, Professor Lance Stockwell shared a wonderful piece of advice with respect to being a practitioner. The essence of his advice was: Lawyers should refine their case and practice their craft until the most complicated set of facts can be easily explained to anyone regardless of age, skill, education or other factor. I took his advice to heart and it has served me well.

The folklore of law school teaches students on day one that success is measured by class rankings, performance in extra-curricular activities, such as a law journal or mock trial, and, ultimately, offers of employment. As students transition to become practitioners, success seemingly becomes measured by the number of hours billed plus wins in the courtroom, as well as, perhaps the ascension to partner. But, in order to achieve all that “success,” lawyers often neglect their personal well-being.

The best advice I can share with young, ambitious people is to grant yourself the grace of rest and self-care. To rest is not to fail. Saying “yes” to a positive work-life balance is a skill set that must be sharpened. We must recharge because there is never a shortage of injustices to fight!

At TU Law, you’ll find a rainbow of vibrant student organizations – including the Native American Law Student Association and OutLaws — through which to make new friends and deepen your understanding of specific areas of the law.