Michael C. Turpen (JD ’74) and Wm. Stuart Price (JD ’82) have been inducted into The University of Tulsa College of Law Hall of Fame which honors alumni and friends for their distinguished contributions to the legal profession and support of the College of Law. 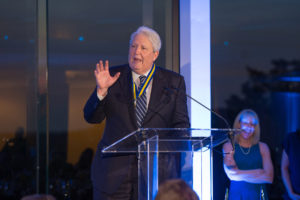 Turpen became interested in pursuing a career in law after reading To Kill a Mockingbird. “That book changed my life,” Turpen said. “I wanted to be a real-life Atticus Finch and hope I’ve lived up to author Harper Lee’s expectations.”His parents urged him to attend TU where he earned a bachelor in science degree before going to law school. “My parents didn’t go to college but believed in giving their kids roots and wings.” While attending TU, Turpen worked a number of jobs including forklift driver and Santa Claus at Sears.

Several years after graduating from TU Law, Turpen was the Muskogee County district attorney from 1977 to 1982 and was then elected as the attorney general for the state of Oklahoma. In 1986, Turpen received the National Foundation for the Improvement of Justice Award and was honored by the National Organization for Victim Assistance as one of Ten Outstanding National Leaders in the Field of Victim Rights. Since that time, he has been a partner in the law firm of Riggs, Abney, Neal, Turpen, Orbison & Lewis in Oklahoma City, Oklahoma.

“I’m motivated to improve the quality of people’s lives. That’s what gets me up in the morning. It’s inspiring.”

Turpen appears weekly on Oklahoma City NBC affiliate KFOR’s award-winning public affairs show, Flashpoint with Turpen & Humphreys. Previously, he appeared on ABC’s Politically Incorrect with Bill Maher and was featured on PBS’s national documentary, Vote for Me: Politics in America. As a nationally sought-after public speaker, he has presented the keynote address for conferences of the National Association of Attorneys General, the Fourth Federal Judicial Circuit and the National Family and Juvenile Judges’ Association.

The numerous awards, honors and appointments he has received include induction into the Oklahoma Hall of Fame, the Care Center’s Louise Bennett Distinguished Service Award, the Oklahoma Arts Council Governor’s Award for Community Service; Treasures for Tomorrow Award from the Oklahoma Health Center Foundation, and the Urban Pioneer Award from the Plaza District Association. 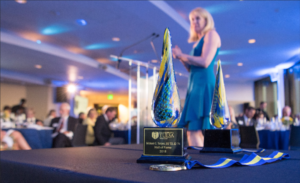 With his friend and fellow TU Law Hall of Fame inductee, Stuart Price, the courtroom at TU’s College of Law was named the Wm. Stuart Price and Michael C. Turpen Courtroom to honor Turpen’s service to his alma mater. In 2000, Turpen was named a Distinguished Alumnus for The University of Tulsa, and in 2006, he received the John Kirkpatrick Award from Lyric Theatre for his leadership in chairing its successful $10 million capital campaign. Shortly thereafter, he received the Oklahoma Bar Association’s William Paul Distinguished Service Award; recognition from the Clinton Global Initiative for his work with Burns Hargis for Legal Aid of Oklahoma; the Outstanding Volunteer Fundraiser Award from the Association of Fundraising Professionals, Oklahoma Chapter; and the John F. Kennedy Award for Community Service, given by the Oklahoma City Knights of Columbus.

Turpen’s book, Turpen Time: The Wit and Wisdom of Mike Turpen, was published in 2014 and has helped raise $1.5 million to fund college scholarships across Oklahoma. He was appointed to serve a nine-year term on the Oklahoma State Regents for Higher Education and was recently reappointed to serve another term. In 2017, Turpen cochaired the Aubrey McClendon Memorial Campaign for OKC’s Boathouse District, raising over $6 million, and he initiated the Care2Change program at The Oklahoma City National Memorial & Museum, raising funds to ensure every freshman in OKCPS spends a day at the memorial and museum.

Turpen is a member of the American, Oklahoma, Tulsa County and Oklahoma County Bar Associations, and he is a Founding Fellow of the Oklahoma Bar Foundation and a faculty member of the National College of District Attorneys.

Wm. Stuart Price grew up in Denver, Colorado. His father was a warehouse worker who encouraged Price and his siblings to get an education. After earning a bachelor of arts degree in political science from the University of Massachusetts-Amherst, he came to Tulsa for law school. It was then that he discovered his passion for the oil and gas industry.

To this day, Price attributes much of his entrepreneurial success to his involvement in oil and gas ventures and the contacts he maintained in the industry. While his professional interests have also focused on politics and real estate investments, Price spends a great deal of time on philanthropic pursuits.

He is the chairman of Price Family Properties based in Tulsa, Oklahoma. In 2012, Price partnered with Kanbar Properties to revitalize downtown and create more housing options. Price Family Properties now owns 2.2 million square feet of downtown Tulsa which will continue improving downtown Tulsa’s economy. Through his entrepreneurial ventures and his resulting ownership of industrial, office, and multifamily holdings, Price has provided a place for thousands of Oklahomans to live and work.

“TU Law is a great community that allows people to have dreams and act on those dreams.”

From a young age, Price understood the value of education and activism; and as a result, he has been involved in creating and maintaining educational opportunities for many students in Oklahoma. In 2004, he was appointed by former Governor Brad Henry to the Oklahoma State Regents for Higher Education, where he volunteered nine years to help better the 25 universities around the state. Price also has served on the Rogers State College Foundation and as chair of the Tulsa Park and Recreation Board.

His involvement with The University of Tulsa includes membership in the Circle Society, the President’s Council, and the Golden Hurricane Club. He also serves on the Dean’s Advisory Board for the College of Law. Together with his friend and fellow TU Law Hall of Fame inductee, Michael Turpen, Price funded the state-of-the-art Wm. Stuart Price and Michael C. Turpen Courtroom in the law school; he also funded the Lawyering Skills Alcove in the Mabee Legal Information Center. He created and endowed the George and Jean Price Award in Legal Research and Writing. He was a featured speaker and presented “International Petroleum Transactions” in the college’s Argentina Series. He spoke on “The International LNG Industry” for a NELPI and Energy Law Journal presentation and was a panelist discussing “The case of the century: Bush v. Gore” for TU College of Law and The Federalist Society.